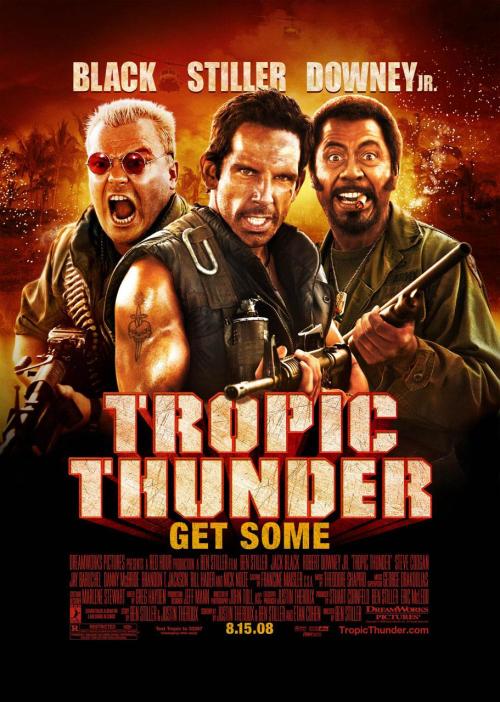 Whether Robert Downey Jr. really meant he was too dumb to understand The Dark Knight or not he definitely proved his extreme low IQ in Tropic Thunder.

After three summer movies and an Inside the Actors Studio dick sucking session, Downey thinks he’s hot shit as he succumbs to Jack Black and Ben Stiller’s usual fart jokes. Tropic Thunder advertises that it’s a satire on war movies but if they really wanted to push the envelope, unlike the repeating Scary Movie franchise, it would of set the movie in Iraq and satirized the current war rather than Vietnam – making it a safe haven for gratuitous violence and gore. It’s attempt to also reveal the excesses of Hollywood filmmaking is quite unoriginal and ironic when you consider both Ben Stiller and Jack Black have made bank producing so much shit over their careers. And so it stands to reason that Downey is viewed comparatively as some kind of thespian parodying a thespian selling out too. What I find offensive about Downey is not that he’s in blackface but his fucking face in general and that he’s considered one of his generations great actors probably because he’s viewed as some tortured genius in and out of rehab. Yet the real irony is how Stiller is being slammed by the disability organizations for his portrayal of a retard when infact his whole career should be. But I think these organizations are fighting a lost cause because according to Rotten Tomatoes it has an 84% rating and Tropic Thunder being the number 1 movie is just another indication of the low standards in which the public is programmed into thinking who and what is funny, I mean just look at Dane Cook for chrissakes! Whatever happened to Mr. Bob Hope and Mr. Danny Kaye? If I’m old fashion then call me old fashion.

As for Tom Cruise’s so called unsurprising comic cameo, where even beneath all that makeup and prosthetics one still can’t help noticing that annoying arrogant voice, his need to be taken seriously (awarded the highest honor in Scientology) as an actor of diversity by showcasing his ability through the use of another jew dancing about to some ungansta like rap. He should of instead stuck with dancing on Oprah’s couch.

At least the Lance Bass cameo wasn’t delusional and infact the only funny moment in the whole movie besides the opening trailers. Given the nature of this beast and it’s apparent box office success I wonder how Stiller and his much needed think tank writing team will concoct a sequel? Maybe the little Vietnamese Boy comes back all grownup seeking revenge and letting the comedy ensue…

A surprising trivia note is how Owen Wilson was originally slated to play the part of the Hollywood agent in which Matthew McConaughey eventually took over after Owen gracefully bowed out by a fake suicide attempt over Kate Hudson. However credit is probably not deserved for such a smart move on his part for he probably just felt insecure with his acting chops alongside such knuckle-heads. And so, unfortunately we had to suffer through McConaughey’s running joke of providing tivo for his clients. At least he spared us for once  by not taking off his shirt. 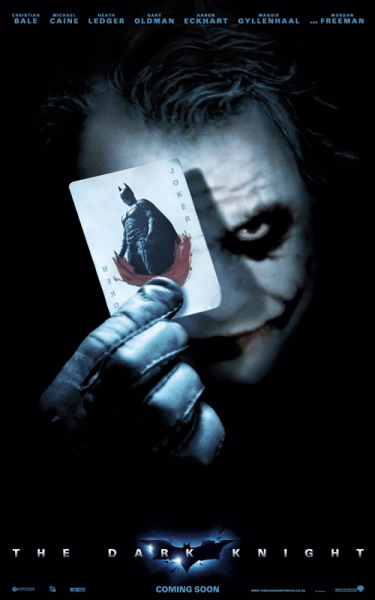 “Nobody panics when things go according to plan. Even if the plan is horrifying. If tomorrow I tell the press that like a gang banger, will get shot, or a truckload of soldiers will be blown up, nobody panics, because it’s all, part of the plan. But when I say that one, little old mayor will die, well then everyone loses their minds! Introduce a little anarchy. Upset the established order, and everything becomes chaos. I’m an agent of chaos. Oh and you know the thing about chaos, it’s fair.” – The Joker

After three weeks The Dark Knight continues to break box office revenues and is already posing a threat to the number one grossing movie of all time, Titanic. Worldwide Titanic‘s gross, beat out Lord of the Rings by over 700 million along with other notable franchises such as the Pirates of the Caribbean, Harry Potter and Star Wars series. Curious thing about this hype is how Titanic attracted such high ticket attendance, for there should be no competition between this shipwreck and this joker – Titanic is simply a disaster waiting to happen.

1997 must have offered little in the realms of entertainment, even including the population growth since Star Wars, it is obvious viewers were still paying for multiple viewings. After following other top money busters of 1997 like Jurassic Park, Men in Black, Tomorrow Never Dies and The Fifth Element, it is clear that disaster and action are a sure thing to draw a crowd but what these opponents lack is Titanic‘s heartthrob, the Leo DiCaprio factor, and the classic Romeo and Juliet story making Titanic more than your typical date movie as we’re sure to see bodies afloat AND titty. But even with the Leo-mania and today’s A.D.D. youth Titanic still appeals to more than these other blockbusters…old farts! With a sure fire plot, seniors are sure to not get confused with the newest hollywood effects and action.

Top Grossing Films of all Time.

But now for the iceberg. Though we are made to believe that Titanic is number one in box office history, the truth is, after ticket price inflation, it reigns only at number six on the list. However, no worries, for our box office formula still holds true as Gone with the Wind, has held its place at number one since 1939. With movies being one of the few forms of CHEAP entertainment during The Depression, Gone with the Wind as well provided something for everyone in the general audiences, including rednecks. 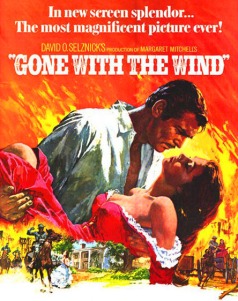 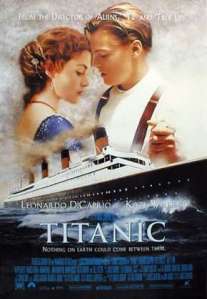 So what will it take to knock Gone with the Wind from number one? Where did Titanic go wrong? For since then movie screens and worldwide releases have only increased. Perhaps Celine Dion and My Heart Will Go On is to blame?