However implausible this Looper movie is I have to wonder if Jimmy Hoffa or Judge Joe Crater were done in with these same sort of tactics and also how the fuck these sci-fi movies always end up being chick flicks in disguise! I mean if you thought last year’s faux sci-fi movie, The Adjustment Bureau, starring Matt Damon with Emily Blunt was gay then wait till you sit through Rian Johnson’s Looper. 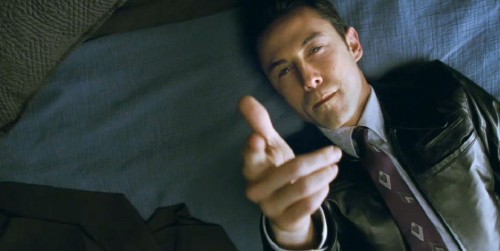 Set in the year 2044, a Looper, in this case Joseph Gordon-Levitt, basically awaits with a shotgun and tarp and executes Gitmo look alikes sent back in time by mobsters using an outlawed time machine in order to dispose of bodies because I guess CSI is so advanced in the distant future. Strapped to the backs of these faceless fuck ups are silver bars as form of payment which sounds good and plenty but it sure ain’t worth the ticket scratch nor time wasted waiting for the real draw of this movie, Bruce Willis.

And then that notion of being confronted with your future old self dealing not only with the conundrums of time travel but fighting for both of your survival and in fear of double crossing yourself by giving into the mobsters like Jeff Daniels, who’s not so much menacing as he is funny. But the movie goes south after the diner scene in which Bruce Willis and JGL sit down over steak and eggs to hash things out because the rest of this way too long film is played out on a fucking farm surrounded by cornfields with shotguns and an axe, a pick up truck, and a toy frog walkie talkie alarm to illustrate this futuristic high tech world.

Also, I won’t bother mentioning the annoying character of the little boy since he’s completely absent in all the trailers too. At least Writer Director Rian Johnson ditches his Wes Anderson aesthetic and is now ripe to be ridiculed as this video exemplifies. 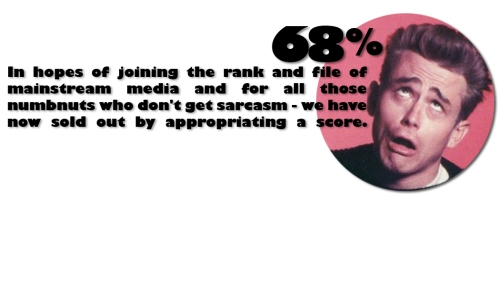 Well, I can’t tell lies, ’cause they’re listening to me. And when I fall asleep, bet they’re spying on me…” – Cheap Trick

After a slew of lame blockbusters since last summer’s Star Trek, Nolan revives a “new hope” among audiences that commercial entertainment can be fun again. Inception, proving to be a crowd pleaser for even those with a brain, starts as a complex plot of exposition and rules in a world addicted to shared dreaming and those in the business of dream thieving when Dom Cobb (Leonardo DiCaprio), a pro at exploring and extracting secrets through the subconscious, is hired by Saito (Ken Wantanabe) to infiltrate and sabotage his corporate rival Robert Fischer Jr’s (Cillian Murphy) mind though the theory of “Inception.” Cobb, should he be able to complete this convoluted dream mission, accepts when promised his freedom and to be reunited with his children – currently in his “Father’s” (Michael Caine) custody (who speaks British unlike anyone else in the fam). As this all star cast continues with accompanied dashing point man Arthur (Joseph Gordon-Levitt), a charismatic forger Eames (Tom Hardy), and a prying, know-it-all, student architect Ariadne (Juno), this sci-fi turns full into the ultimate heist through a maze of multilevel dreams, and a series of kick queues. However problems soon erupt when Jr’s dream goes into autodefense mode and Leo washes up on Shutter Island again and is haunted by his over possessive, desperate, dead wife Mal (Marion Cotillard), who also makes a comeback as Edith Piaf.

Sound confusing? As Winston Churchill said in a 1939 radio broadcast, just a few weeks after England declared war against Germany, “I cannot forecast to you the action of Russia. It is a riddle, wrapped in a mystery, inside an enigma; but perhaps there is a key. That key is Russian national interest.” And one of the keys to this conundrum of a movie is the number 528. Kidding. I’d hate think that unlocking the code to this movie comes down to some quasi mathematical frequency or equation or even worse, numerology, (I mean try sitting through Jim Carrey’s The Number 23!). But if 528/Love is at the heart of the matter, then it’s just yet another similarity to The Matrix. I say, if both Neo and Cobb’s dilemma and motivation is sacrificial love then that’s just pathetic. Churchill was right, I say fuck Mother Russia and let the Cold War begin!

Like No Country for Old Men, a man would have to put his soul at hazard and like Sheriff Ed Tom Bell say, “O.K., I’ll be part of this world…” And in this world Nolan creates a notion that turns into a concept and then an idea that grows into a virus that is resilient and hard to eradicate. So maybe just take a leap of faith and go along for the ride.

“You’re waiting for a train to take you somewhere.

You hope you know where the train takes you,

But you aren’t sure if it will go there –

But it doesn’t matter because you are together.”

Either way in the end is the glass half full or half empty?