I know some of you out there will think I’m jaded but if it were not for love birds Emma Stone and Andrew Garfield The Amazing Spider-Man would be totally unwatchable. Granted, they may not be as glamorous as Liz and Dick but at least they don’t make you want to barf like Robert Pattinson and Kristen Stewart. But enough of that mushy stuff, as the movie was pretty much just a rehash that brought nothing new or exciting to the Stan Lee Spider-Man franchise, except proof that Garfield is more suited for Spidey than Tobey Maguire – who was rather more convincing playing an awkward homo in The Wonder Boys. Emma is delightful as usual and it’s obvious why Jim Carrey is infatuated. 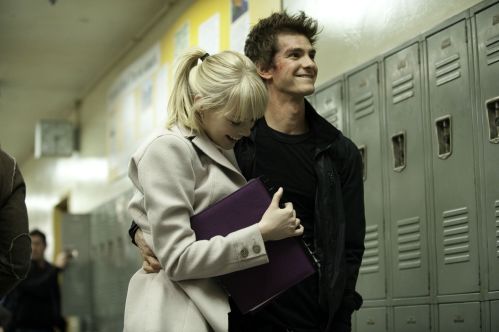 As for the rest of the cast, I actually forgot Denis Leary was Denis Leary…so, too bad he dies. Martin Sheen and Sally Field are there for the hefty paychecks as Martin tries to make up for his fuck up of a Son by nagging Garfield with countless speeches on good morality. While Garfield mumbles to himself and shoots villains in the crotch, the over theatrical arch villain, a bloated bipedal lizard on steroids, Dr. Curt Connors (Rhys Ifans) fits right in with the West Side Story sound stage set design, with his tears streaming to the tempo of the corny ass soundtrack by James Horner from Titanic. Who would have thought you could do worse than Celine Dion?

As the 3D probably concluded a total of 3 minutes, I’m convinced the only reason why Director Marc Webb got the job was for his last name. I guess there are two kinds of fans, Spider-Man and Batman. I obviously prefer The Dark Knight and await in eager anticipation. In fact, I already Fandangoed the fucker and now all I have to worry about is getting good seats – unlike these two old Broads that sat down in a little Boy’s saved seats for his Parents who went to go get him popcorn. More exciting than the movie itself was the confrontation that followed – like none I’ve ever witnessed in all my movie going years. Suffice to say the Parents had to call Management when the old bats refused to move, but not until the entire sold out theater starting chanting “Get up, Get up” did they stand. And I thought Spider-Man was for kids.