Black to the Future

Summer is officially here and with that comes the onslaught of the proverbial sequels and wannabe blockbusters to spawn next year’s sequels. And sadly Men In Black 3 falls victim to the genre of the wasted chapters and money (both theirs and yours).

Maybe I’m being cynical (as usual) and the Filmmakers actually had noble intentions with the fortune that Josh Brolin is a dead ringer for playing the young Tommy Lee Jones. Given that – all they had to do is concoct some silly time travel motif to send Kay back to the summer of 1969 as Brolin! Coinciding it with the first Apollo mission and the spacey Warhol Factory, a little civil rights comic relief, a Stones song and a hippy or two, you will find yourself in a $200 million budget movie. 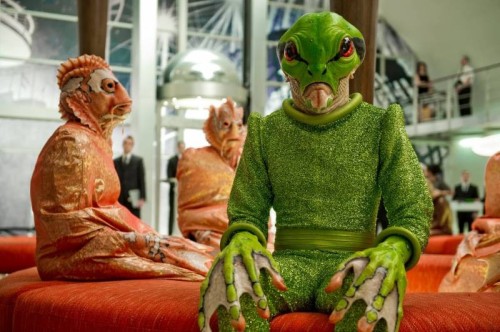 But as we all know, the notion of good intentions in Hollywood is a misnomer. Just look at all the countless charity balls and galas they hold there for all those limousine liberals in their tax deductible designer clothes while I’m subjected to pay Midtown prices for lunch everyday!  Most recently George Clooney’s fundraising event at his palatial Hollywood home for Obama’s re-election campaign cost his exclusive 150 guests $40K a plate! While in reality they are just perpetuating this Fiat Currency that has enslaved us to the almighty dollar. Sorry, I know I’m just as guilty for greasing the wheels of the big studios by paying these outrageous 3D prices for a movie ticket.

In fact I saw that Wes Anderson movie as well the day after but that’s another blog to read if you can get through this one, so I need to get to the point – Men In Black 3 sucked. I was suckered in by my own silly sentiment of trying to recapture my childhood memories and fondness for the characters of the original 1997 movie. But not only did I realized that I can’t even remember a fucking thing about the second MIB, I also see that I haven’t really matured much since then AND that it’s just the filmmakers such as Barry Sonnenfeld and Co. that just got more retarded. If you don’t believe me wait to you see how this movie ends – not with one small step for Man but one giant leap fucking backwards for Mankind.