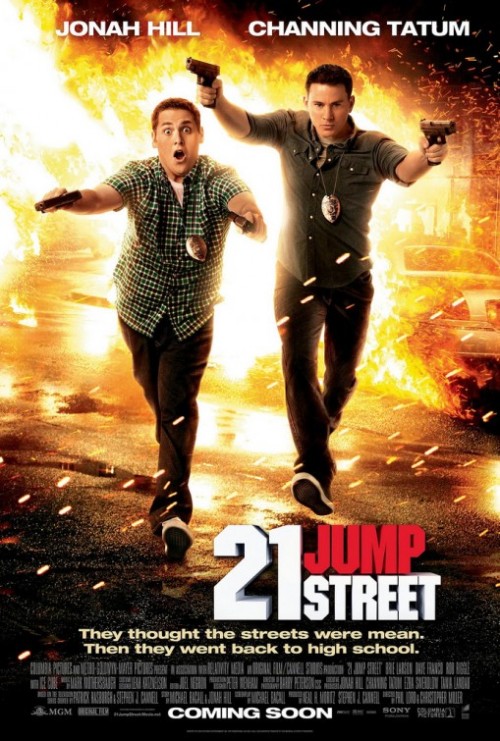 I never watched 21 Jump Street when it was on TV, mainly because I’m not gay, but also because I was too busy watching Sesame Street. So coming into this revamped remake I only had a vague notion as to what it was – undercover Cops posing as High School students to infiltrate the bad apples that roam the hallways – and as recently recruited Jonah Hill and Channing Tatum are offered these narc jobs, Chief Deputy Nick Offerman tells them tongue in cheek, that 21 Jump Street is an “old forgotten program that people drag out of mothballs and bring back to life for no other good reason than that they’re too lazy to come up with something original and they figure people are too stupid to care.” I knew at least this movie wasn’t going to take itself too seriously. 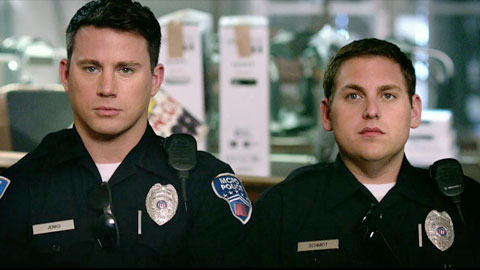 But in the end it resulted in a True Romance style shootout followed by the obligatory never-ending stupid car chase and explosions, culminating in the celebratory reading of the Miranda Rights in unison. But before we get to this high five moment, there actually were some funny moments in this genre mash up of the Buddy Cop/Prom movie between Skinny Jonah and Stripper Channing provided with a script by Hill and Michael Bacall, cowriter of the witty Scott Pilgrim vs. The World.

As for the rest of the cast, Ice Cube embraces his stereotype as the head of the narc division, and if James Franco could play his younger brother he probably would considering his narcissistic desire to be eclectic, but Dave is credible even with the Franco lisp and fits the part of the popular eco friendly teen bound for Berkley dealing the designer drug HFS (Holy Fucking Shit). But Jonah’s love interest, Brie Larson, is less so believable because the heart of this movie is the bromance offering itself to a boundless stream of homo jokes and literally a stupid dick sucking finale.