Except of course when it comes to Pixar movies, my Pez collection, and Toy Story 3! Finally after 11 years of contractual disagreements between Good vs. Evil, Pixar vs. Disney, Shiite’s vs. Jews and the unforgivable Cars, a resolution’s made as we rejoin now 17 year old Andy (after a gay overused camcorder montage replete of first steps, birthday candles, and “singing” Randy) where the premise is immediately presented as operation playtime backfires. Woody and the gang may have escaped the attic but instead are mistakenly donated to Sunnyside Daycare! Where they are joined with a colorful new cast of toys. However, thinking that they hit the jackpot, they soon realize they are in Dachau.

(Even Timothy Treadwell would find this bear scary with his Chill Wills charm and all.) 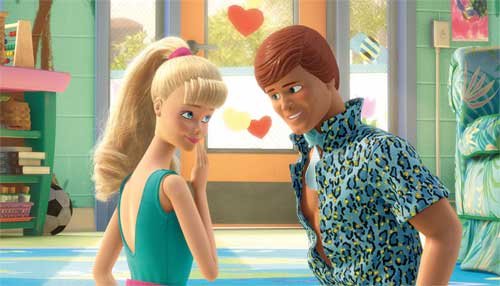 (Climb aboard the dream weaver train!)

Ok, maybe the Holocaust is a bit of a stretch but one thing that can’t be overlooked is Toy Story‘s likeness to The Brave Little Toaster: rejected toys seeking their master, confronted with newer, flashier replacements, and a garbage dump ruled by a menacing magnetic crane (The Claw!) and conveyor belt advancing them to their ultimate doom. Yet, while The Brave Little Toaster will always be recognized as a classic it fails in comparison because in what reality does a kid prefer a vacuum cleaner to a Space Ranger? I sure as fuck know that my brother wouldn’t – the recyclables, dishes and trash are currently piled to the ceiling waiting to be sorted.

But despite Pixar’s familiar plot and chase it turns out they aren’t completely dry as they replenish in producing another damn good original short, Day and Night (not to be confused with Tom Cruise’s Knight and Day).

In the end the feud of contractual obligations between Disney and Pixar actually fortiutously gave, (expecially to its first generation audience) thru natural course of time as we have grown up with Andy – thereby reversing the emphasis from the toys to him, and our own closure with childhood and to this trilogy…which almost left me in tears until that Bonnie girl shows up again! Yet the only suggestion of a sequel I fear is when Woody says , “Someday, if we’re lucky, Andy will have kids of his own and we will always be there for him.” Hopefully by then in the summer of 2020 this 3D fad will be over at least. But either way given the absence of any Fathers I’d be very surprised if that happens! I mean where the fuck is Andy’s Dad anyway? At least we know who Buzz’s is!