“The soul has it’s principal seat in the small gland located in the middle of the brain.”

But I found my soul struggling to stay awake as the movie is billed “a soul searching comedy” and is apparently still searching. The movie centers around NY actor Paul Giamatti (Paul Giamatti) who while struggling with his role in a Chekov play comes across an article in The New Yorker about a storage facility for souls. Not knowing what else to blame for his shortcomings he further ventures to the storage facility (coincidentally located on Roosevelt Island substituting for Blackwell’s Lunatic Asylum) and buys into soul extraction. While the script and sets are copied and all too familiar, the only original and refreshing part of this scene is Dr. Flintstein (David Strathairn) who is very convincing and reassuring when Giamatti finds out that his heavy soul is just a chickpea – which happens to be the best prop. (I hope my soul is a vinyl copy of side 1 of  Zeppelin 4.)

Apparently Giamatti has no fear of being typecast and should maybe next play all the characters in Pirandello’s Six Characters in Search of an Author to further explore his persona and narcissism. But the real twist to this so-called metaphysical comedy is of course when Giamatti wants his soul back and finds it’s been smuggled to Russia’s black market where he then has to go and bargain with soap opera loving mobsters? and mules all the while wearing an ushanka. 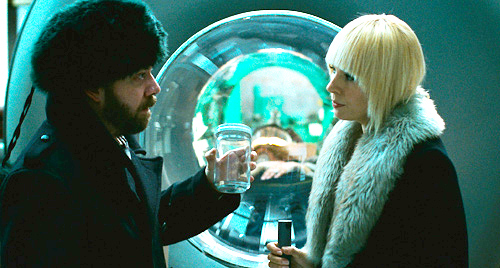 Sophie’s quest for peace of mind is ultimately a shitty handheld study on Kaufman’s Eternal Sunshine of the Spotless Mind. It would of been spot on if when they extracted Giamatti’s soul Jim Carrey pops out with John Malkovich’s voice box.